Supergroup, Brawlers, have left quite the impression on the punk rock scene since they began in the Summer of 2013. 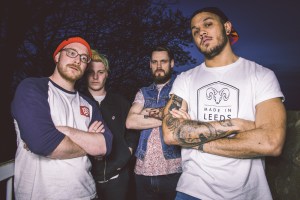 Supergroup, Brawlers, have left quite the impression on the punk rock scene since they began in the Summer of 2013.

Formed from the ruins of bands such as Dinosaur Pile Up, Castrovalva, Leftover Crack and Martyr Defiled – Brawlers have played countless tours, copious amounts of festivals, and have received radio play on XFm and Radio 1; all with just the release of one EP. So what makes Brawlers so loveable? Simple. The band have ridiculously catchy choruses that get stuck in your head for days (I speak from experience), combine that with killer riffs and sweet, rocky, vocals and you’re instantly on to a winner.

Raw Meat: Tell us about your local music scene; what’s your favourite local venue, are there any record labels or stores that we should look up, what’s the scene like where you’re from?
Brawlers: Our favourite venue has to be The Brudenell Social Club. It's ran by Nath who is the best dude ever, plus we have only really played two proper shows in Leeds and they were both there - with No Age and The Thermals - both amazing shows. The scene is good, but you guys know that - Pulled Apart By Horses, Battlelines, Hookworms... plus Crash Records is a great shop - we actually put our first show on ever there, just hired a PA and bought a load of beers to give away... the rest is history!

Name one track or band that you love from the past.
Collectively, Phil Collins, Michael Jackson and that's about it. We all like totally different stuff. I love Sir Lord Baltimore heaps at the moment.

Name one track or band that you’re loving right now.
We just got off a few shows with a Canadian band called Pup who are buddies of ours - their new single 'Reservoir" is the best thing ever recorded. Maybe ever.

Name one track or band that you think we should be listening out for in the future.
My friends in The Xcerts showed me some demos from their forthcoming record and there is a track called 'Drowning In The Water' and I honestly think it might make them as big as Biffy Clyro this time next year.

What can we expect from you next?
More shows, we're very much a live band, you know? So we're out touring a lot, but just getting our shit together for this record. It's been keeping me up at night trying to get the songs just right. Here's hoping to the next Blue Album by Weezer, eh?