Girlpool create a sound that's raw, but far from vulnerable. The remastered version of their self-titled debut EP is out now on Wichita Recordings. 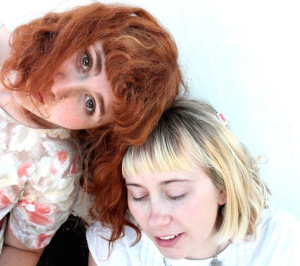 Girlpool create a sound that's raw, but far from vulnerable. The remastered version of their self-titled debut EP is out now on Wichita Recordings.

Before I start, let's get one thing straight - Girlpool's set was sheer brilliance.

So I'm back at the Shacklewell Arms for the fantastic Girlpool, with support from London's indie-poppers, Oscar. After some confusion over the difference between a free gig and a gig you have to RSVP for left some disgruntled fans at the bar, the doorman clearly gave up and the room started to fill. As Oscar began with a backing track that reminded me of Casiotone for the Painfully Alone I settled into my beer and took in the band.

Rhythm guitarist and lead vocalist Oscar has an amazing voice. He talks like Marvin the robot from Hitchhikers Guide To The Galaxy and then sings with an amazing depth and wry humour. The lead guitarist/ synth player brought some much needed layers to the songs, as did the female backing vocalist (whose solo moments were wonderful - she had a really individual tone). The bass lines were fantastic and the bassist looked like he was having a lovely time. Oscar pull influences from distorted Brit pop to Alphabeat and create sweet, simple indie in its purest form.

So, I have a great friend. In fact, I live with her. She's like a character from Ghost World and I know what she likes - music-wise. As soon as I stepped out of this gig I told her that Girlpool are her new favourite band, and by the time I was home she'd bought the EP. Girlpool are the coolest people that I don't know. They are great. At this gig (and therefore I assume every gig), the two women that make up Girlpool created a wall of distortion and intertwining riffs with only a guitar/ bass each and a tonne of back and forth vocals. They were endearingly humble and gave off an air of calm intensity.

Obviously one of the highlights of the show was single, 'Blah Blah Blah'. It felt bigger and faster than I expected. It felt like watching a five piece band, and it was only on listening back over the EP (which if you don't already have, go and get) that I noticed quite how bluesy some of their songs are; there are a lot of hidden rock n roll influences that give the whole recored a little bit of a timelessness. Not that Girlpool sounds 'classic', the opposite -  it could sound fresh at any time.

Their songs are trebly, simple and endlessly amazing. Imagine if First Aid Kit hated more, or Peggy Sue swapped reverb for attitude - you're getting close to the vibes the room was filled with as they made their way through their tuneful punk. They sounded innocent and jaded at the same time with a poignancy in the repetitive nature of their lyrics.

Did I mention it was really good?