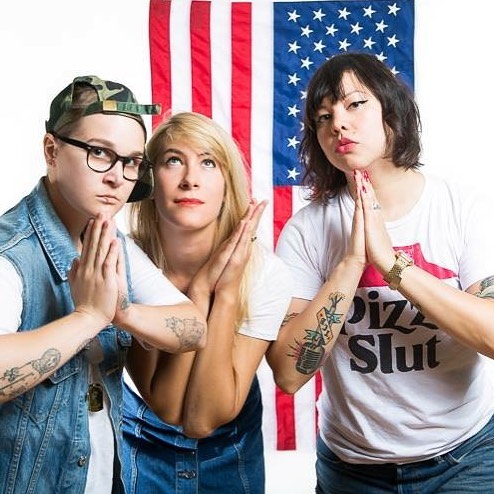 Out of the lyrically gifted Uncle Meg, Ash Wednesday and Clara Bizna$$,it would appear that Hand Job Academy isn't as busy as they once were. At the moment Uncle Meg's music video (and recent debut adult film) directorial work is taking up the majority of their time, while Clara Bizna$$ is DJing and entrepreneuring the shit out of New York and LA as well as podcasting with flow-queen Ash Wednesday. Ash (and maybe more so, Meg) are still rapping, but more dropping verses on collabs than releasing their own stuff.

But we can reminisce, and learn from their wisdom.

If you're ever over Brooklyn way, the band recommend you check out Union Pool, a bar set in a former swimming pool supply store that puts on shows and has a taco truck in the backyard. Sounds pretty solid.

The guys also shouted out for the amazing queer hip hop scene in Brooklyn, which is (let's be honest) what we've all been waiting for. We're going to break the rules slightly and ignore their past influences (ranging from Hank Williams to Wu Tang) and just focus on mining their minds for what they know best. And that's queer NY hip hop.

Stylistically there isn't a huge amount that ties this list together, but their talent, sense of humour and political awareness is strong enough to make them a family. Let's do this.