Experimental pianist Hauschka, supported by Luke Abbott, could not have chosen a better setting than London's Union Chapel for his meditative and occasionally humorous compositions. 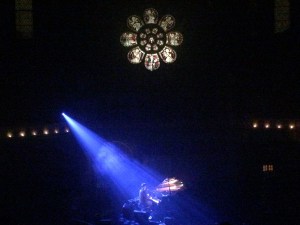 Experimental pianist Hauschka, supported by Luke Abbott, could not have chosen a better setting than London's Union Chapel for his meditative and occasionally humorous compositions.

The incredible evening began with Luke Abbott's drone textures and layered melodies reverberating around the beautiful venue, Union Chapel. Each of his pieces lasted around five minutes, and as the set went on he introduced more discernible beats and delicate refrains into the layers of his incidental-ish music.

Abbott has a way of building the soundscapes so gently, but at the same time so violently jarring, that you hardly notice the depth of what was there until he drops everything else away; perhaps partly due to the distraction of the larger, sharper, more in your face machinist sounds.

Mild mannered Hauschka's short but charismatic 'hello' speech, including a shout out for the wonderful Cafe Oto (also in London) and an explanation for the evening's performance. The songs were not to be how they sounded on the record, with a view of showing the audience a different voice, and perhaps giving an idea of how he works.

Although not always technically impressive, Hauschka was always fascinating to watch. Playing only a treated grand piano, with sampling and other triggers all within hands reach he created incredible waves of sound, and although the audience were silent during each performance, as soon as the last notes had rung out the chapel exploded with applause and cheers. His creations were confusing and relentlessly beautiful. The electronic elements are vital, but live, you almost don't notice them in the wash of the streaming piano melodies.

The piano's lid was open and tin cans were placed on certain sets of strings, metal hung down from the lid onto other parts, some were muted with reverberating items, some with tape... until the last piece. Removing all the other treatments, Hauschka completely filled the piano with what appeared to be ping pong balls; it was amazing to see the stationary show suddenly transform into something visually stimulating as well as they pinged out of the piano with the violence of his playing (as well as giving the piece an eerie echoing sound) and ponged onto the floor. He left the stage to huge applause, made all the louder by the venue itself. It was worth staying for the short encore though, even if only to watch Hauschka and the stage hands try to collect all the ping pong balls so that the last piece could be played with the piano in its natural state.

This wasn't much like any gig I'd been to before; something between meditation drones, incidental experiments and classical piano, but it was very moving. I felt the music swell inside my chest, and the feeling stayed with me for the whole bus home.

Hauschka's most recent album, Abandoned City, is out now.