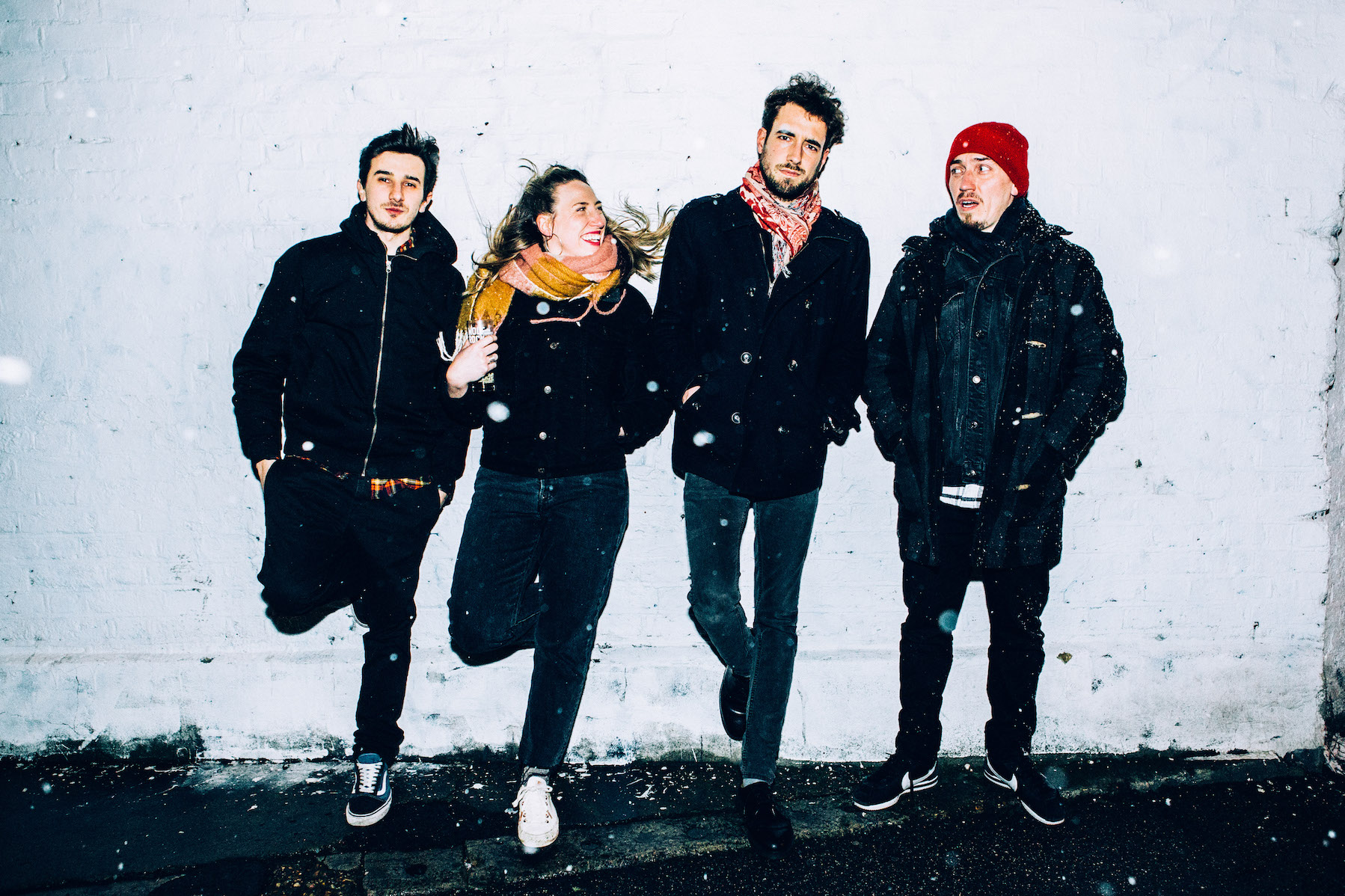 A mere four years ago I was still in my twenties, I was living in a flat with cockroaches, mice and a high-maintenance partner. I loved that flat and I genuinely thought I was happy. It was here, sat on the cheapest Ikea sofa, in this haven for vermin (myself included) that I first heard Poeticat.

I stood up and breathed heavily. I felt she’d found my letters and read each one out loud. The catalyst was ‘Centre of the Concrete Square’, if you’re wondering.

And now, we’re here. I live in a ramshackle house full of joy and no vermin. I’m walking through Soho to find and interview Coltana, a band risen from the ashes of Poeticat. Creating all my Christmases at once, they’ve even agreed to play the next Raw Meat Live (after some minimal persuasion: “We’re a bit in your face, are you sure?” “…yes, I think that will be fine.”) Things are looking up.

“Have you got any mayonnaise? We’ve got to be quick Lucien’s got to leave for Turkey in ten minutes.”

A debut EP (Blighty) released this summer and a second one already underway, Coltana is on its way to two years old. Started because, “We didn’t want to be Poeticat anymore” and because the sound had changed so severely that they felt ingenuine to continue under the same name. Rather than delete the old stuff, they reinvented themselves and, through the power of the internet, enlisted two new musicians, Lucien and Danny.

The new sound is heavier than indie, but less mindless than punk. Comparable to Skunk Anansie, the band themselves aren’t quite sure how to describe it just yet. Guitarist Blake explains, “The elements change. Now that it’s louder we don’t have to just fit the music around the words. We have more options.”

And in terms of what vocalist Cat actually sings, her trademark anger-driven spoken-word is still present. “With Poeticat, I would write poetry and the band would make music around it. It made interesting music, but it didn’t always work. Now it’s more like these guys give me music and I get to write to it. It’s refreshing. I feel like I’m really learning.”

“I’m just singing with anger now instead of shouting. I don’t know how the world will digest it, but it is what it is.”

In terms of the new additions, French bassist, Lucien’s traditional music background combines with Blakes’s completely theory-less liberal freedom to create something completely new. “It’s a bit of this and that. We’re all into different stuff.” The breadth of the variety of influences is clear in their choices of the questions we ask everyone. Venues they enjoy, and past, present and future acts that they love.

Lucien: "I listen to a lot of indie and alternative shit through the ages. I like eighties pop. I’m really into INXS. I like the new wave and post punk stuff. And the alternative nineties stuff like Pavement.
Right now, there’s one band that mixes a bunch of influences into something really well digested. It’s the 1975. They still have this indie character, but it’s mainstream. It’s like being in on a post-modern pop joke.
I also like Pale Waves. And a lot of artists on the Dirty Hit label, like Wolf Alice, they’re on there as well… Belle and Sebastian, and a French band Phoenix."

Blake: "In terms of venues, The Windmill. Tim, the promoter, he knows what he’s doing. It’s a hidden gem. Two months ago we went to see Wiley at Brixton Academy and it was fairly dead, he obviously wasn’t feeling it and kept checking his watch… Anyway, we watched that gig and were a bit like, meh. So we went to the Windmill afterwards, paid £3 to get in, it was rammed and we saw three incredible bands.
My future band has to be Church of the Cosmic Skull. They’re like ABBA mixed with Black Sabbath. They’re form Nottingham. The main guy wears a white suit, and they all call each other brother. Cult-y. There are three female backing singers, one of them plays electric cello, Hammond organ player… they do four-point harmonies. They’re just sick. They’re all self-produced. Apparently, they were offered major labels and turned it down. Even if that’s not true, whatever.

Cat: "Future? Well there’s three Windmill bands that I really like. Am I allowed three? Mantis Opera. How would you describe them? They’re all playing different time signatures at the same time. They’re very clever. It’s like math indie electro.
And then we also saw Pregoblin recently at the Windmill. Blake doesn’t like them, but I really like them. There was a girl doing backing vocals with a Hitler tash. It’s almost like performance art, in music.
The other band that I think are really good from the area are Bad Parents. I really like them. They’re pretty nice and people can take that how they like it, but I think it’s lovely to show that you love someone onstage and to be happy to be alive. Do you know what I mean?

I also only recently discovered King Gizzard and The Lizard Wizard. It was a 15-year-old boy that told me about them, so I thought I’d be ahead of the curve, but I know everyone knows about them already. Anyway, we were seated when we went to see them, but beneath us was a mosh pit and it was so refreshing to see a venue in London sold out, full of teenagers just sweating their bollocks off, just going for it. I want that more. It really gave me hope again.
And my heritage band would be Distillers. It was pretty big when I heard that for the first time. She just didn’t give a shit, did she?"

Danny (drums): "This month I listened to a lot of depressed music because it depends on the days. When the weather is bad I listen to all the Coldplay stuff. But when the day is better and it’s a sunny day… I recently discovered a band from Australia called Dune Rats.
My old bands would be System of A Down and Offspring."

Because of their ‘folken-word’ history in Poeticat, Cat and Blake have played tiny tea tents at festivals and sat onstage playing to seated audiences, but now they’re interested in writing music that makes people move. “Also, to a certain extent we saw the glass ceiling of the poetry world.” Cat describes how after playing Glastonbury’s poetry tent (twice) they would then wander over to watch the rock bands. “We realised that really, that’s where we wanted to be.”

And there’s no slowing them down. Looking forward to playing to more regional audiences, and possibly even outside of the UK, their aim is to push Coltana further, both musically and in their audience reach.

"I'm scared. Because I'm managing us."

Their original plan was to create three five-ish track EPs before the end of the year (!), but that’s now morphed into the possibility of an album. “Self-released. I like to maintain control.” I think she’s joking. Who knows.