IS TROPICAL’s new album Black Anything is being released in five parts, across five continents. This is second installment, 'Cruise Control' / 'Say'. 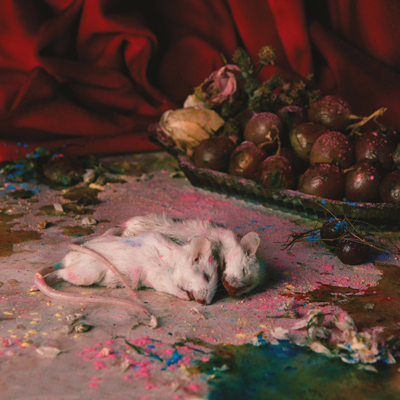 IS TROPICAL’s new album Black Anything is being released in five parts, across five continents. This is second installment, 'Cruise Control' / 'Say'.

This instalment of Black Anything (part 2) was recorded in Europe and is the result of building up a collection of field recordings while travelling around the continent, before pulling their ideas together in southern Spain. 'Cruise Control' glitches through an ethereal melody with an echoing, sensual distance. Elements of electronic rave flicker under distorted guitar layers and watery synths; you couldn't call it 'upbeat', but there is a bittersweetness to the song.

The adorable, but never twee, 'Say', shows a side of IS TROPICAL that we haven't seen before. The guitars are acoustic, and the beautiful weirdness (bending synths and swaying bass lines, in 'Say's case) that comes so naturally to them hints that all is not as simple as it seems. It's a completely wonderful song.

Black Anything, will be released in five 10” transparent picture disc instalments, containing two tracks per vinyl. The artwork is a visual representation of both the recording process and the release with each record displaying the continent where the tracks were recorded. The five vinyls when displayed on top of each other will create the globe, unifying the concept.