JOHN are a straight-edge, no frills hardcore punk band. 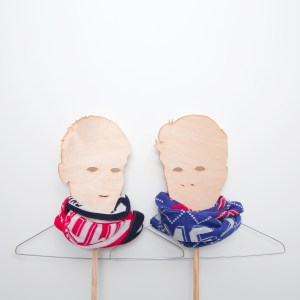 JOHN are a straight-edge, no frills hardcore punk band.

Formed early last year, the duo have quickly found their feet and received some incredible press in the past few weeks. Their name, albeit  slightly problematic for finding them on the internet, immediately tells you what this band are about: the music. There’s no sense of wanting to be something they’re not and their raw talent proves why.

JOHN have the power, the talent and the whole, “I don’t give a fuck” attitude down to a T. These guys aren’t going to follow the crowd, they’re going to make their own crowd and get rid of all the nonsensical bullshit in the music industry. If you want our advice – buy their album. You even get a little ‘thank you’ note. What more could you want?

Raw Meat: Tell us about your local music scene; what's your favourite local venue, are there any record labels or stores we should look up, what's the scene like where you're from?
JOHN: We’ve both taken London as our surrogate despite coming from different towns before meeting each other. I’m not so sure about a local scene. It often seems like a lot of little towns glued together, each with their unique good/shit bits. Of course we know some other super people making stuff in the city but most of the time it feels like it’s just us two venting in a warm room.

Name one track/band that you love from the past.
John 1: I consistently return back to an album called Saturate Every Atom by Lack. It’s beautiful from start to finish; the lyrics and artwork are super and I have the deepest regret of never seeing them live. Track ‘CPH’ is a good entry track if I really need to sell it to you.
John 2: For me it’s Hot Snakes - 'If Credit’s What Matters – I’ll Take Credit'. They’re one of my favourite bands and John Reis is a bit of a guitar hero for me. The song sums up his relentless rhythmic playing, which I’ve always admired. Try playing it and it will leave your arm more tired than a lonely weekend.

Name one track/band that you're loving right now.
John 1: I’m breaking the rules and writing a playlist of five tracks I listened to on the bus this morning:
1. Thin Lizzy – 'Trouble Boys'
2. LCD Soundsystem – 'All My Friends'
3. The Men – 'Pearly Gates'
4. Low – 'Clarence White'
5. Teeth Of The Sea - 'Responder'
John 2: I’m loving Ovlov. They have this melodic style that I first loved when I was younger when getting into bands like Deftones. There’s some others as well, like Roomrunner and Pile.

Name one track/band that we should be looking out for in the future.
John 1: Burning Alms. We met John from Alms whilst he was clearing our glasses at the pub where we first discussing starting JOHN and we’ve been friends ever since. Check out ‘Matadors’ - it’s a belter that I wish I wrote.
John 2: Band for the future would be Baked. A mix of fuzzy Theo Verney style riffs alongside more chilled out tracks. Check out the song ‘Mick Jagger’ - the drums are killer.

What are you up to now?
John 1: I’m sat looking at this word document in the railway arch where I work. I can hear a train rumbling overhead and it’s interrupting Emily Haines’ voice.
John 2: Right now I’m in a van delivering some furniture that my partner and I have been restoring.

What can we expect from you next?
More songs and more visual stimulation very soon! You can grab our first EP that came out in September by clicking here.

We first heard JOHN at Southsea Fest 2014, read about who else we saw by clicking here.