Having become French music critics’ darling and conquered his home nation’s charts, DJ and producer Petit Biscuit reveals what the rest of the world has to look forward to. 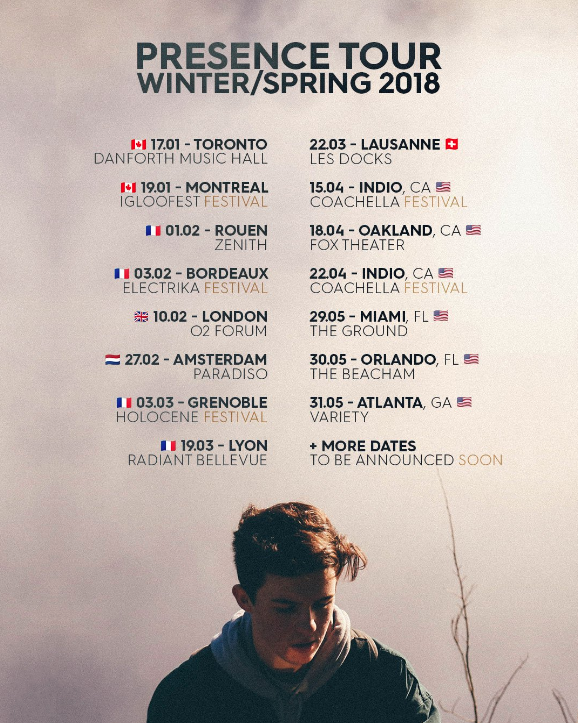 Having become French music critics’ darling and conquered his home nation’s charts, DJ and producer Petit Biscuit reveals what the rest of the world has to look forward to.

Earlier this week French DJ and music producer Petit Biscuit performed on national television to celebrate his debut full-length Presence – our review of which can be found here – being nominated in the Best New Album category in this year’s Victoires de la Musique, the highest musical honour going in France. He – alongside a size of an orchestra normally reserved for the greats of the industry – serenaded his home nation’s ears and hearts with 'Sunset Lover', a sweet, meticulously-crafted gem of a tune that’s just been certified as a Diamond Single five times over. For those who need to brush up on their level of certifications, that’s just the 2,500,000 copies sold.

Tonight Petit Biscuit is kicking off the Presence Tour by playing the 2,350-capacity O2 Forum in London’s Kentish Town, with an eye on taking the set to most of Europe, North America and Asia, including a dream-fulfilling slot at Coachella. It’s fair to say, then, that Mehdi Benjelloun is not your average 18-year-old.

Even before the show starts, tonight’s audience is willing Benjelloun to success. There are elated cheers and excitable whoops at the slightest hints that the main attraction is taking the stage, even if they're wrong.

Petit Biscuit enters stage, having the buzzing, fizzing album-opener ‘Creation Comes Alive’ for company. He cuts a slim figure, not helped by riding solo, and his set-up being barely existent. Alas, he stands proud, merely looking at the crowd, perhaps taking a moment to realise that everyone is there for him. The silhouette provided by his impressive plasma backdrop is one of power as the song builds to SONIA’s female vocals asking, “What do I do with you?”.

It soon becomes apparent that this is a question that Benjelloun may very well be asking of himself. As the playful synths of ‘Oceans’ and the vast impressive accompanying visuals light up the crowd, he simply stands, not entirely sure what to do with himself. Crowd interaction goes beyond acknowledgement with a rampant cover of Zedd and Alessia Cara’s ‘Stay’ as PB plays conductor in a clap-along to thuds of the drum. Benjelloun, and the crowd bowing to his every beat, are only just warming up.

Benjelloun begins to take the form of the star everyone considers him to be with the introduction of recent single ‘Problems’. There is a noticeable rush to the stage, the room is lit up by screens of smartphones as many ready themselves to document their being there at that very moment. A moment which Petit Biscuit dutifully seizes. As Lido’s cool-as-you-like vocals simmer along, Benjelloun hoists a guitar onto his shoulders and strolls to the front of the stage, revelling in the duly-deserved attention.

At the end of most songs he places his hands palm-to-palm, as if thanking the audience that they are with him in that moment. It’s understandable – his has already been a career many would yearn for – but it all gets a bit #humble. In any case, the beginning acoustic plucks of ‘Sunset Lover’ confirms that the direction in which the gratitude is flowing should most definitely be reversed. As the epic ‘Follow Me’ arrives at its strings-led breakdown (Benjelloun learned to play an array of classical instruments in the earlier stages of his life), the God-like status we all suspected is confirmed – as the strings to-and-fro, he simply slowly raises his arms, all stage lights and eyes pinned on him.

‘Gravitation’ is a little slow and disengaging to the point that the crowd momentarily becomes borderline nonplussed. The energy and good vibes are ramped right back up again with ‘Waterfall’ as drums are thumped with drama and vigour in equal measure and most near the stage jump up and down towards the song’s climax upon Benjelloun’s instruction. The loudest cheer of the night is of a tone that confirms people are indeed having fun and thoroughly happy to be there.

An evening of wall-to-wall positivity and optimistic ambiance would get a little tiresome and tedious. Fortunately, with title-track ‘Presence’, Petit Biscuit switches things up and takes us to the dark side. The deep, thudding bassline, wailing, frenetic vocals and strobe lighting takes us from a belief we can conquer the world to a fear we won’t be able to get out of it. As the song nears towards its frantic, menacing peak, things are slowed down and anticipation is built to the point of fervour. The palpable tension is finally relieved as the snare drops and Benjelloun is raving front of stage with the rest of us.

As the enigmatic encore enters its final stages, Petit Biscuit is photographed by one of his crew as he builds excitement and dances with us one last time. This Benjelloun commanding the entire room – never mind just the stage – is almost an entirely different proposition to the one at the beginning of the evening that appeared to not really know what to do with his arms. We have seen an evolution and revolution in personality, music and live performance tonight and, with palm trees fit for Malibu providing a backdrop, Petit Biscuit is ready and armed to take on the rest of the world.