Popstrangers' Fortuna, recorded in five days in central London, is gritty, filled with hooks and leaves you with a lingering feeling of excitement. Out 02.06.14 on Carpark. 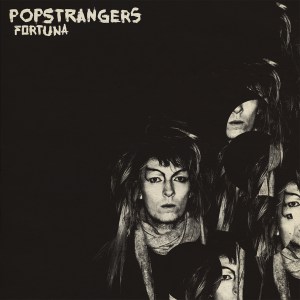 Popstrangers' Fortuna, recorded in five days in central London, is gritty, filled with hooks and leaves you with a lingering feeling of excitement. Out 02.06.14 on Carpark.

The opening track ‘Sandstorm’ sets the tone, with its slow, grumbling intro into its deviously catchy chorus; it could have been plucked from an album of the early nineties without surprise. It feels good; crisper production than Antipodes, yet never feeling overblown, it’s raw guitar music that never loses its live essence. Singer Joel Flyger's vocals sit perfectly over it all, reminiscent of The Velvet Underground or The Virgins. Relaxed, he croons and drawls over the second track, ‘Don’t Be Afraid’; it’s slightly off kilter, but as with most of the album it is excessively catchy.

‘Distress’ is Popstrangers wearing their punk influences firmly on their sleeves. It’s not quite as strong as the rest of the album but it maintains the atmosphere the first tracks managed to achieve. There is a sense of nonchalance that many bands strive for - Popstrangers make it sound effortless. Rather than deterring you from the album, ‘Distress’ makes you desperate to hear the rest, a band finding its feet as they delve through genres without hesitation. Highlight and lead single ‘Country Kills’ is possibly the most archetypical pop song on the album. Distorted vocals with a near perfect and relatable chorus, “Oh my country will kill me now”, culminating in the words, “But whatever” it's hard not to agree; perfectly capturing the causal presence Popstrangers ooze.

In the latter half of the album the big choruses take a back seat and stop shining as brightly, but as the formula of Popstrangers' choruses start becoming predictable everything around them only feels edgier and stronger. It’s hard to listen to an album where every song seems to be fighting to be a single; you crave something deeper than a catchy chorus, which the later tracks deliver in abundance. ‘Destine’ creeps in with a riff to spin your head and draw you into its nest; neither obvious nor predictable, it feels sixties, different, it shakes the album up at just the right time. ‘Rightbabies’ is an out and out punk track much like ‘Distress’, and once again returning to layered, vaguely distorted vocals, that dance intimately with guitar riffs in the verses. It only falls short as it feels rushed - the verse is so dynamic and involved the rest of the song can’t help feeling a little tacked on.

The album closes with a stand-out track. ‘What’s On Your Mind’ creates an atmosphere to get lost in. Its slow, lethargic drum fills scream psych, building a dreamy haze that leads into Joel Crygers' voice cracking. Acting as a sudden break in the melancholic relaxed sound he hones throughout the album, it creates a buzz of urgency that’s been stirring throughout and it’s hard not to feel the sudden outburst of emotion. I downright love it.

This is an album that never feels fake, at times rushed, but with an abundance of quality. Fortuna is constantly on the verge of something great, but just falling slightly short. Popstrangers are definitely a band worth watching for the future.