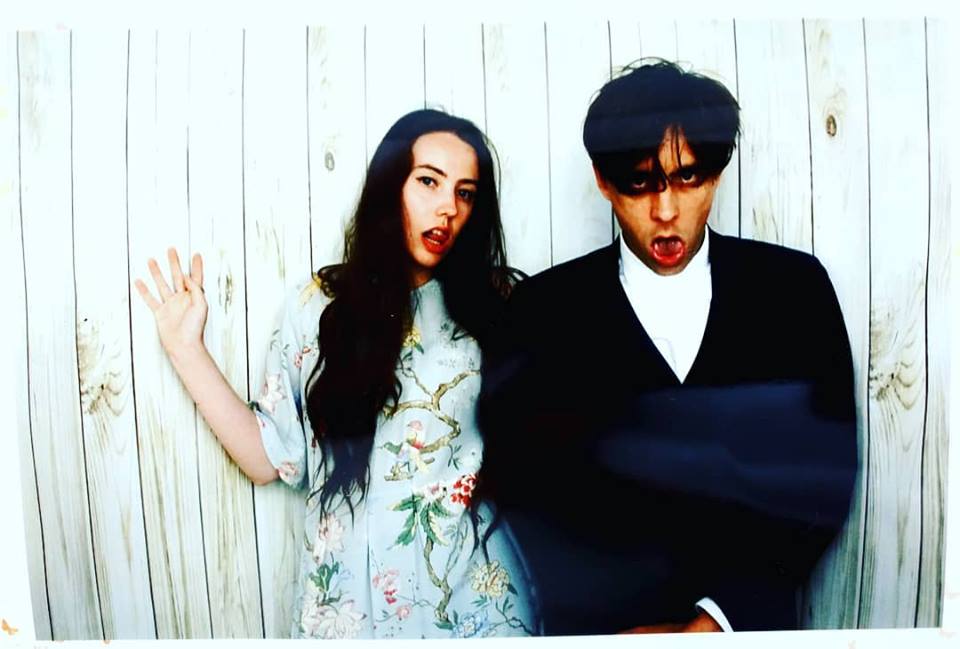 And wouldn't you know, they're playing our co-pro Halloween party with Roadkill Records this year. Aren't we good to you.

RAW MEAT: Tell us about your local music scene; what’s your favourite local venue, are there any record labels or stores that we should look up, what’s the scene like where you're from?
‍Well, there’s plenty going on isn’t there? Guess that’s the upside to the societal issues that the UK is experiencing - people forcing their voices to be heard. That doesn’t put food on the table, nor does it get people housed properly, but it does provide an opportunity of coming together. That’s important, because isolation and silence is a killer. More and more we’re attending and being invited to perform at places showcasing a glorious mess of different makers and creators. Thankfully there isn’t a particular musical genre dominating either, because that tends to encourage a closed ‘this is our thing’ vibe, and that is the opposite of what needs to be happening. What we’re seeing and hearing is largely tag-less.
New Gums and Space Honey recently brought together film makers, visual artists, poets and other performers who all shared the same platform. It’s important, and definitely a time to be engaging and responding, because fantasising about taking a van full of the worst political and corporate offenders down to Hoo Peninsula for a bit of bullet-in-the-back-of-the-head-tom foolery isn’t really feasible in reality. I suppose for us, escapism isn’t really an option at the moment, however attractive it momentarily might seem.
So, if you haven’t, check out Gallery 46, New Gums, Space Honey, but scratch the surface and there’s plenty of individuals and collectives emerging out of the stink.

Name one track or band that you love from the past.
With no sense of irony whatsoever, 'In The Air Tonight' by Phil Collins really does it for the both of us at the moment.

Name one track or band that you're loving right now.
Well, in the spirit of rebellion we aren’t sticking to one, so … we finally got around to listening to the Goat Girl album, and yeah it’s brilliant. We’re also big fans of the consistently inventive Jenny Hval, particularly her record Blood Bitch, but we’ve been giving The Long Sleep a fair few spins too. Otherwise, we found Ambient Black Magic by Rainforest Spiritual Enslavement (AKA Dominick Fernow) really interesting in the way field recordings are underpinned by something classically musical - although Black Magic Cannot Cross Water is the best title for anything ever, and also a great record from him.

Name one track or band that you think we should be listening out for in the future.
We recently played with Pink Eye Club, who also has been putting on nights in South London. He’s a brilliant lyricist that rants over disco-tinged backing tracks, definitely worth checking out, and he’s bringing together some of the more interesting performers in London too, like SCUD FM. Also, there’s a band called Great Dad - we’ve played with them a few times by chance, and their track '1000 Speedboats' is a standout for us.

What are you up to now?
We’ve been looking at our use of synthesisers, and having a lot of conversations about dispelling the go-to tag of eighties synth pop, rejecting the view that synthesisers making pop songs needs to be pastiche. It’s the same way folk music is associated with acoustic guitars or lutes! Folk music is surely just the peasants’ music, and folklore continually informs our music - we’re fascinated with the esoteric, ancient, buried rituals that run through our culture and society, propelling us towards certain actions, like beings ‘performing some function unknown to themselves’, as they say in Picnic at Hanging Rock.
We think revivalism is nonsense, and something we are inherently against contributing to. Tradition is one of the most repressive tools around - cross-generational repeated behaviours and human habits keeping us on a loop. People might say that’s forgetting the past, but we’ve got books, songs, art, film, constantly documenting everything. That’s the point of art isn’t it? The people’s history, unedited - maybe documentation is the only tradition worth holding on to… But folklore is different, it’s the past abstracted and imbued with new meaning. We can use it to make a comment on the present - for example, the idea of the witch as an icon for oppressed people, and witchcraft as a kind of outsider art.
So that’s what’s generally occupying us now, along with painting, writing, spoiling our cat, and general survival.

What can we expect from you next?
We are returning to Manchester for a show at The Soup Kitchen with Afghan Sand Gang on November 9th, October 6th at Paper Dress Vintage, and the Shacklewell Arms on October 27th. Looking to get ourselves up and down the country a bit more in the future, and at some point will be dropping new tracks as we’re currently in the studio with Dave Allen (who produced our first single, which you should definitely grab while you can).