Are SKD heading for the UK Official Singles charts? No. But if they did happen to strike a number one single, you get the feeling they wouldn’t be very happy about it. 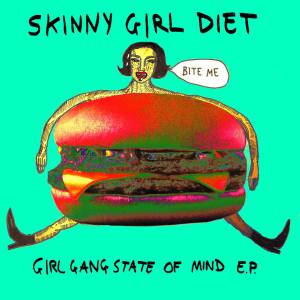 Are SKD heading for the UK Official Singles charts? No. But if they did happen to strike a number one single, you get the feeling they wouldn’t be very happy about it.

Skinny Girl Diet make the kind of unadulterated grunge that you might have seen the kids dancing to at The Bronze in the early seasons of Buffy, had they been around back then. Their EP, Girl Gang State Of Mind is so raw and under-produced that it’s hard to imagine a live show sounding much different.

The EP offers five furious, to-the-point songs. In its entirety the relentless barrage lasts just fourteen minutes; growling, snarling and spitting. While the girls would likely be repulsed at being compared to such a high-maintenance celebrity, there’s no denying the similarities between Skinny Girl Diet and the early music of Hole on tracks like 'Nadine Hurley'. Also, with occasional flavours of Liz Phair’s 1993 album Exile In Guyville, they evoke nineties grunge with effortless snarling, anarchistic resolve and matter-of-fact vocal delivery. That’s not to say they sound bored, just that they sound tired of having to make their statements against the modern drudgery. You can almost feel their eyes rolling behind the lyrics – slightly childlike, but with an air of desire to retrieve their generation from the state they feel it is in.

Behind their hypnotic instrumental enthusiasm are not particularly unique guitar tones or riffs, but they're delivered with violent determination. Tempo variations inside songs, provide a dishevelled atmosphere that fits perfectly with the EP’s tenacious, lo-fi style. Howling like banshees, comparisons can also be drawn to Pussy Riot, who the band performed in honour of at a fundraiser a year ago. Girl Gang State Of Mind shoots and scores, is ironically hungry, and rages for its 14 minutes before ending without so much as a hiccough.

The attention won’t be going to their heads anytime soon.