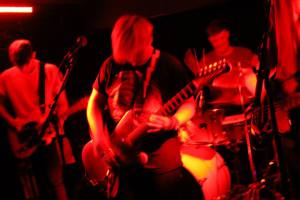 Our South Londoners, Suburban Group are grunge through and through and although their online presence looks sadly abandoned of late, we're hoping that it's merely a hiatus.

First up the guys name checked London's Scala as their current favourite venue. Originally a cinema, Scala has been serving as a cinema/ music venue/ aircraft parts factory for Londoners for nearly 100 years. It's a great place with a lovely atmosphere. The record labels they mentioned were the fantastic Big Scary Monsters Records - the go-to guys for loud guitar bands, Topshelf Records - an eclectic and carefully curated selection, and south of the river favourites, Banquet Records - not a label, a record shop and a bit of an institution. Banquet also run an indie club night called New Slang, with live bands and DJs until late; a fine way to spend a Thursday evening.

When asked what their favourite past artists are these grungers came up trumps with the almighty Nirvana, as well as Pixies, Sonic Youth and Bush. I'm sure we don't need to introduce you to any of those names, but we can hook you up with a free download of 'Women of War' by Pixies, while shoving some Sonic Youth in your ears and Bush in your eyes.

For their current squeeze Suburban Group chose Beasts, whose roaring debut single, 'Annie' was released earlier this year. Beasts really came into their own in 2014, with big festival slots and a fair bit of radio play under their belts. They've got a gig in London in January and we speak from experience when we say that they're ones you want to experience live.

Interestingly Dinosaur Pile Up were who Ollie (of Suburban Group) recommended that we listen out for in the future - perhaps not realising that their album Nature Nurture had put the dinos firmly on the radars of many still pining for nineties Seattle. The band recently got back from touring India and have hinted at big plans for 2015 so keep your ears peeled.