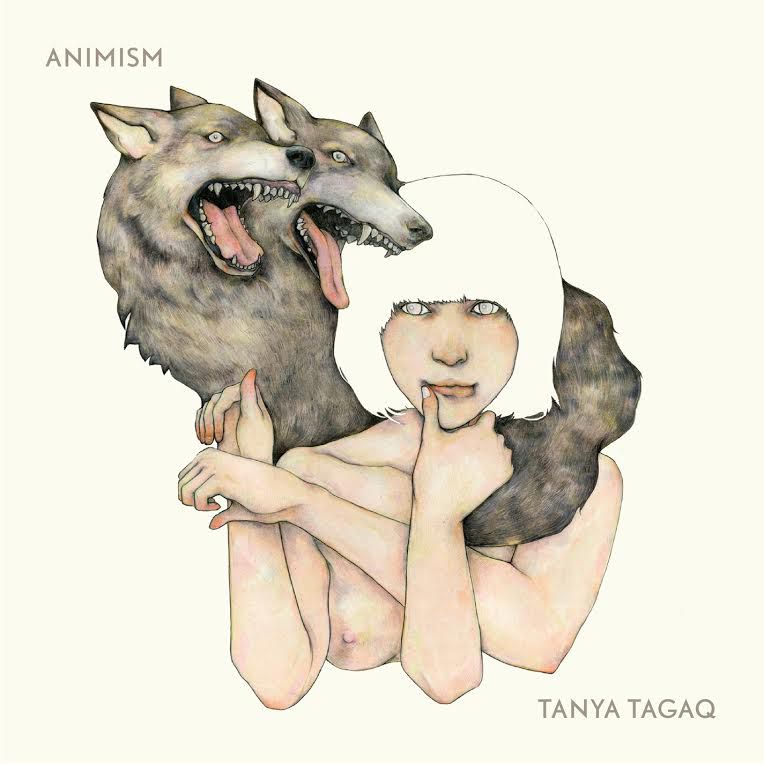 She continues to thrive in a genre landscape that she all but owns, just as naturally as her politics might suggest.

To understand this album, you must first understand its starkest concept: throat singing. Throat singing is a vocal technique which allows the vocalist to make more than one tone come out of their mouth at once. For this reason, it is often called harmonic singing, which is a bit misleading, as the two tones created are not always in harmony. One genre of the technique was performed by Inuit women as a sort of back-and-forth breathing game, or performance art, to entertain themselves while the men were away hunting. It’s a strange sound that may shock you at first, but once you’ve opened your mind to it, perhaps you’ll find a lot of other musical practices less bizarre than you might have before. There’s certainly no auto-tuning this.

Tanya Tagaq, however, performs the technique alone, and her subject matter is much heavier than a lightly competitive game resulting in laughter. Often known solely by her surname, Tagaq is a Canadian Inuit who taught herself throat singing techniques at high school. The world’s introduction to her was through Bjork’s 2004 album Medúlla; without a doubt the Queen of avant-garde’s most polarising piece of concept art, made almost entirely of sounds created by human voices from different cultures. Tagaq was the throat singer featured on four of the tracks. Since 2004 however, she has been in the public eye for various political reasons, mostly focusing around vehement support for her own culture after having an online petition started to have her baby son taken away from her after tweeting a “sealfie” (a photo of him next to a dead seal). She has stated in interviews about her incredible connection to nature, having spent more of her time around animals than with humans; it’s all very interesting stuff.

September 2014 saw her rise again upon receiving the 2014 Polaris award over fellow shortlisted acts Drake and Arcade Fire. Her performance at the award show was held in front of a scrolling backdrop of 1,200 murdered or missing Inuit women’s names, and was critically acclaimed as “...the most memorable performance in our history of very memorable performances. Epic.” Knowing her political agenda is somewhat useful in your enjoyment of this work. The incredibly soulful vocals mostly lack lyrics, but are clearly lyrical in their own way. These songs aren't made up on the spot, these are songs that Tagaq has written with all the care and attention of what the modern western world we live in considers conventional songs. Upon release of the album in Canada, she described Animism as “a new baby”.

While those of us who have little or no prior knowledge of Inuit culture may find the vocal style difficult to get to grips with (unless of course, we’ve had prior experience with the aforementioned Medúlla, or even briefly in 2007’s The Simpsons Movie), the sounds that pervade them are familiar yet expertly employed. A euphoric first minute of orchestral strings paves the way for some forceful percussion that you might expect from some good alternative rock, which transcends the entire record, despite beginning on an almost commercially marketable cover of The Pixies' ‘Caribou’. The screeching strings and grandiloquent rock drums which follow are a pairing not many get right, but at times, Animism comes damn close. Hitting the spot would be all too marketable though, and the album stays unrelentingly with the avant-garde. It would be ridiculous to expect anything else from her.

Do not think that the vocals are as gritty and guttural all the way through as you might find they are upon first listen. In fact, on tracks like ‘Rabbit’ and ‘Tulugak’, they are so delicate that they could lull you into stupor. The album is varied in a way that transcends the orthodox use of lyrical content. Sometimes there are bird sounds, sometimes there are mammal-esque sounds. Sometimes violins scratch, and sometimes Tagaq’s vocal timbre is as polite as a pie; but when the orchestral strings kick in, they are elegantly appetising, and the percussion is more grasping of attention than any I’ve come across for a long time.

So; academic listening, yes, but unpalatable, no. Before you know it, you’ll be six songs in to the 11 song set, and if you’ve given it your full attention and an open mind, you will be happy to see it through. It is with pride that I award my first ever 10/10 rating. This may not be my favourite album I have heard, but it is the album I am compelled to attract you to more than any other. Listen to this album. Experience this album. Then discuss this album.