Dreamy alt-pop band Big Tooth use crafted bass lines and wistful vocals to create timeless songs. Their song writing is equal parts wisdom that draws on the past, and originality that will carry them long into the future. 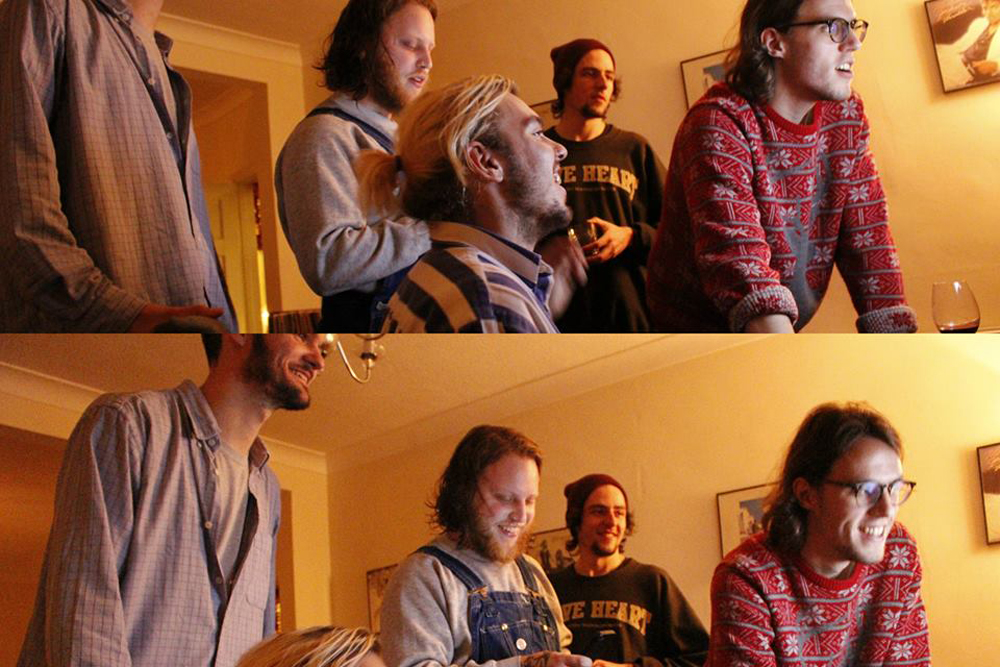 Dreamy alt-pop band Big Tooth use crafted bass lines and wistful vocals to create timeless songs. Their song writing is equal parts wisdom that draws on the past, and originality that will carry them long into the future.

It didn’t take them long to woo us with songs like ‘Temptation’ and the darker ‘Annie Girl’, so we thought we’d ask our latest crush a few key questions to see if they’re ‘take home to mum’ material.

RAW MEAT: Tell us about your local music scene; what’s your favourite local venue, are there any record labels or stores we should look up, what’s the scene like where you’re from?

George: After about our 10th show we realised we were gigging the “London Circuit”, and that we were part of the pop/ indie scene. We read the reviews about our shows and chatted to other bands we were gigging with and found out that we were in fact part of a scene! In all honesty we were just taking up gig offers that sounded fun to us and then slowly start seeing the crowds getting bigger and the bands we were playing with getting better.

The band would agree with me when I say O2 Academy main stage is going to be a hard venue to beat, it was an amazing night, we had so much room on stage!

Joe: Obviously we all love playing shows, but some shows are better than others. The two shows we played at the O2 Academy Islington were probably our best, but our most memorable has to be when when we played at the The New Cross Inn in Deptford recently. This old geezer just wouldn’t leave us alone, myself especially. Wanted to be my best friend. It was a bloody nightmare, but actually turned out to be a great show. It still surprises me when people come up to me at the end and tell me how much they enjoyed the show.

Patrick: Kingston has a good independent record store called Banquet, they also host a lot of in store shows which is cool. Lots of big bands play around that area too. I hear that Foals played a pretty raucous show at the Hippodrome the other day.

Adam: I go to university in Kingston and, like Pat, I would recommend Banquet Records. They started off slow in terms of new releases but now they have a kind of cult following who go to all their shows. They put on regular club nights as well as live shows for all kinds of bands – from Neck Deep, to Johnny Foreigner; from Frank Iero, to Enter Shikari.

Tom: The music scene in our area used to be bigger than it is now. There used to be a few pretty decent venues to play for bands which could turn out a decent crowd, one of which being Heatham House. But these venues don’t really do live events anymore. However, having easy routes to central London we play majority of our shows there, especially in Camden.

George: Nat King Cole – ‘Too Young’… that song can make me cry!

Joe: I would have to say Bob Dylan. I was obsessed with him for a very long time!

Patrick: Talking Heads – ‘This Must Be The Place’. It never fails to make me smile.

Adam: The Beach Boys – Pet Sounds. That record made me want to become a producer.

Tom: Rush – ‘YYZ’. That song showed me to a whole new level of drumming.

Name one track or band that you’re loving right now.

Joe: I’m in love with Daniel Johnston’s music at the moment. I admire and look up to great songwriters and he’s one of the best in my opinion.

Patrick: Apparat; I was definitely late to discovering them, even though I’ve definitely heard lots of their stuff before on TV and in films.

Adam: Godspeed You, Black Emperor – been listening to their latest release since it came out and I recently got it on vinyl.

Tom: Michael Jackson – ‘Rock With You’. An absolute classic and damn it grooves.

Name one track or band that you think we should be listening out for in the future.

Patrick: Epilogues; true music for the soul, truly beautiful songs, every single one.

Tom: Hester! A great band and some awesome material.

George: Playing the last couple of shows of 2015, finishing off some new songs and getting ready for 2016.

Joe: Trying to get noticed!

Patrick: Enjoying the London gig scene and picking up some new fans with each show.

Tom: Playing as many gigs as we can to finish the year, whilst writing new material.

George: Recording an album in February.

Tom: Some awesome shows and some new material that’ll be like honey being poured down your ears.