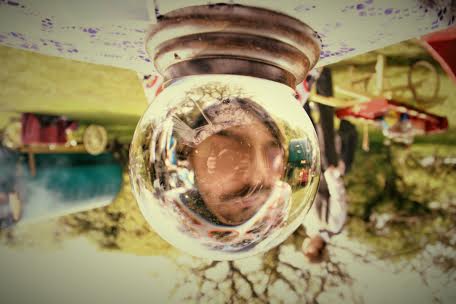 Lindgren collaborates with friends and musicians to create electronic music that surrounds you with breathing space.

The latest track from Button Eyes features Silvertongu3 on lead vocals for the first time for the band, accompanied by the ever magnetic Rosa Slade (Peggy Sue). It's an Eastern influenced, beat lead dream with huge nineties chill out influences. Beautiful.

Raw Meat: Tell us about your local music scene; what’s your favourite local venue, are there any record labels or stores that we should look up, what’s the scene like where you're from?
Button Eyes: I live in London at the moment so I'm really spoilt for choice. There's a strong hip hop scene in particular and a lot of good nights go on in Brixton which is just down the road from me and easy to get to (and back from at 5 in the morning...) I seem to get quite a few DJ bookings in Brixton and it's always a good vibe. The backstage room at Jamm is always the best place to catch up with people and power through the drinks rider.
My favourite record shop is called Rare Kind Records. They were the first shop that supported Button Eyes when we started out, they're based down in Brighton and they deserve your custom!

Name one track or band that you love from the past.
Buffalo Springfield - 'For What It's Worth'.

Name one track or band that you're loving right now.
I know it's not brand new but I've got 'So Good At Being in Trouble' by Unknown Mortal Orchestra on repeat today.

Name one track or band that you think we should be listening out for in the future.
Becky Becky - 'House Of The Black Madonna'.

What are you up to now?
At the moment I'm just sorting out the release for my new solo album as "Minority Association". The album is called We Are Not Them and will be out this summer.

What can we expect from you next?
The Button Eyes album is getting close to completion and should come out towards the end of the year. We're actually gonna go out and play some live gigs around then too...