No-one is immune to Common Holly's charms. Latest single, 'If After All' twists in the wind and sticks in your throat. 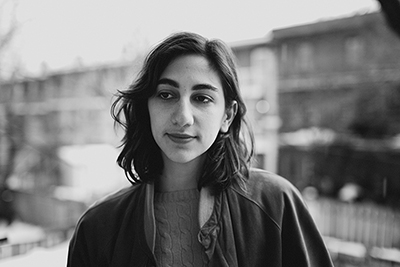 No-one is immune to Common Holly's charms. Latest single, 'If After All' twists in the wind and sticks in your throat.

We like this incredibly uncommon Holly for several reasons; real-name Brigitte Naggar's tangible confidence in her odd-ball dark folk, the use of endless glistening guitars, the way she stashes samples like little secrets for the listener to hunt out, and because she said she likes our interview questions.

You think you know where 'If After All' is going and then it's kicked up several notches into a hissing snarl, turning you on your heels at least twice. As far as a first track-we-heard goes, Common Holly's sounds are immediately unique, drawing us into a world of her own creation, and we're fascinated to hear more.

The track is taken from her forthcoming album release Playing House.

RAW MEAT: Tell us about your local music scene; what’s your favourite local venue, are there any record labels or stores that we should look up, what’s the scene like where you're from?
Common Holly: Great questions!
Favourite local venue is definitely Casa del Popolo. I kind of feel like that's the generally understood favourite for medium-sized good sounding, good vibe rooms. It is owned by the guys from Godspeed You! Black Emperor, and it's free to book (although always very busy). Also, all the sound engineers there are lovely.
Some great local labels range from the smaller more independent ones like Egg Paper Factory and Second Best Records, to larger more foundational ones like Constellation Records and Arbutus. Overall we are well surrounded here in Montreal.
My favourite local record store, also owned by great musicians, is Phonopolis. Such a good vibe over there, and it's located right by my apartment in the Mile End (--I recently overheard from a tour guide that this neighbourhood has the highest per capita amount of artists in all of Canada, feel free to fact check that.) [We wont.- RM]
There is a lot of amazing music in Montreal. The reality is that living here is so affordable that it is an excellent opportunity for artists of all sorts to thrive in, if they can survive the winter.

Name one track or band that you love from the past.
I used to be obsessed with 'Blood (In the Tracks)' by Attack in Black.

Name one track or band that you're loving right now.
I know everyone loves Solange, but man, I just love Solange. Her latest record, A Seat at the Table, is absolutely killer. Oh and if I'm allowed to pick a second one definitely have a listen to Dan Misha Goldman (from Snowblink), whose most recent album is a compositional breath of fresh air!

Name one track or band that you think we should be listening out for in the future.
Keep an eye out for Ada Lea. She is a brilliant musician and also happens to be a close friend and bandmate (see: Rose Bush), and she is about to put out her first record in the next few months. It's a little thicker-skinned than her previous material-- her songwriting is cutthroat and totally compelling.

What are you up to now?
I'm working on two things, musically speaking-- first I am trying to solidify Common Holly's live performance so it adequately reflects all the work I put into making the debut record, Playing House, and then I am also secretly already working on new material. I can't stop, I am obsessed.

What can we expect from you next?
Touring! I want to come see you. Who are you? Where are you? I'm coming!