Demob Happy are the new school of British rock. Loud and brash, they keep an undercurrent of Brit pop melody for keen ears to pick out through all the distortion and screaming. 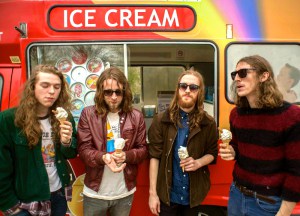 Demob Happy are the new school of British rock. Loud and brash, they keep an undercurrent of Brit pop melody for keen ears to pick out through all the distortion and screaming.

Raw Meat: Tell us about your local music scene; what’s your favourite local venue, are there any record labels or stores that we should look up and what’s the over-all ‘scene’ like in Brighton right now?
Matt from Demob Happy: Check out Late Night Lingerie. Everyone who’s done anything from Brighton has played there. We're from Newcastle anyway, so ours is an import. Brighton incubated us and gave us university money so we could relocate. I guess everyone’s just doing their own thing, and because of the great collective coincidence we all use guitars so it looks scene-y.

Name one track or band that you love from the past.
'Something In The Air' by Thunderclap Newman. First one that came into my head.

Name one track or band that you're loving right now.
Michael Jackson’s Zombie just released a song called ‘A Place With No Name’. It sounds like legitimate MJ but in reality it’s not so I’m kinda sad.

Who do you think we should be listening out for in the future? Any bands you share the stage with often that are on the road to great things?
There’s a guy in Canada called Tony Ezzy. He talks to aliens and sings about it, it's the best. He'll be big soon enough.

What are you up to right now?
We’re on tour right now. I'm writing this from the empty living room of an unopened hostel and I just ate off the floor. Hull was amazing last night. Sheffield tonight!

What can we expect from you next? What’s on the horizon?
An EP is next. We have enough material for 3 albums though. But that'll come when it feels right. Sooner than that were releasing ‘Succubus’ on November 17th and the physical version on 7" in December. It's our first release so I'm going to frame it for prosperity, then be forced to sell it for gas bills when the insidious little prick's running this country get their fucking way.

You still have a chance to see them on the last night of their tour at Bleach in Brighton.
Watch Demob Happy's video for 'Suffer You' by clicking here.