The Sewer Rats are the second ever signing to our friends at Fluffer Records and it's not hard to see why. 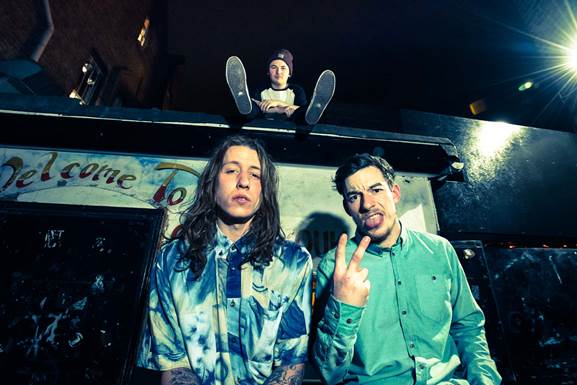 The Sewer Rats are the second ever signing to our friends at Fluffer Records and it's not hard to see why.

The inherent darkness, brooding bass lines and ominous build into an explosion of buzz, feedback, distortion and riffs is more doom/ stoner rock than grunge. As the band build up to their first release with the guys at Fluffer - an EP called Money Maker, we felt it was the time to get to know them a little better.

RAW MEAT: Tell us about your local music scene; what’s your favourite local venue, are there any record labels or stores we should look up, what’s the scene like where you’re from?
Sewer Rats: The scene round Grimsby is only recently started to take off again, there seems to be a really big buzz all of a sudden and it's sick as fuck. There’s a real raw stoner/ psych vibe going on and it seems to only be getting better.Because the scene has been none existent until recently we've been travelling to a venue in Scunthorpe which is like a ten minute drive away called The Lincoln Imp. It’s definitely the best local venue going at the minute.There’s a record store in Grimsby called Replay Records that stocks local music that has a really cool vibe about it.

Name one track/band that you love from the past.
We're all really into Led Zeppelin and always have been. 'Whole Lotta Love' has got to be one of the best songs ever written.Real raw Zeppelin.

Name one track/band that you’re loving right now.
There's a band from London who go by the name Sunlight Service Group, who have a song out called 'Live From The Moon' and its killer. People should really check them guys out.

Name one track/band that you think we should listening out for in the future.
There’s so many good bands out there at the minute, but there’s one that really make our balls tingle at the minute and they're a band called Love Buzzard. People should really get behind them, psych duo vibes.

What are you up to now? What can we expect from you next?
We've got an EP coming out next month through Fluffer Records entitled Money Maker, and we're fucking amazed with how good it's sounding. Besides that were just gigging constantly, that’s all we want to do.

Sewer Rats are also playing Flufferfest 2015 along with Telescopes, LOOM, Demob Happy, Love Buzzard and Kagoule. Even the good, bad and (less of the) ugly Raw Meat DJs have been asked to spin some tunes, so we'll look forward to seeing you there.