Irish post punks, Slow Riot have released a video for their latest single 'Trophy Wife', out now via Straight Lines Are Fine. 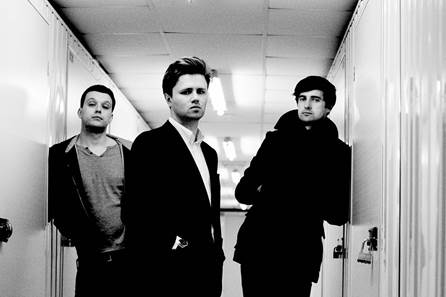 Irish post punks, Slow Riot have released a video for their latest single 'Trophy Wife', out now via Straight Lines Are Fine.

Brooding guitars and reverberating vocals are post punk staples. Slow Riot add catchy melodies and chant-inducing lyrics to the cocktail, layering post punk bass lines, shoe gaze guitars melodies and alt rock beats into a delicious monochromatic beverage. If you missed their London gig in April, they've just announced that they'll be playing Dublin's Interlude Festival next month, so get swimming. You can pick up the single here along with the B-side 'Awake For Days'.

RAW MEAT: Tell us about your local music scene; what’s your favourite local venue, are there any record labels or stores that we should look up, what’s the scene like where you're from?
Aaron: Dolans Warehouse & Kasbah Social Club are two great venues in Limerick that are a lot of fun to play in and we've played there more times than I can remember. There're a lot of great bands coming out of Limerick right now, definitely check out:- Fonda, Windings, Rusangano Family, Whenyoung. There's also a Independent record label called Out On A Limb that's put out some fantastic stuff over the years.

Name one track or band that you love from the past.
Aaron: Ah there's too many good bands and songs in the past! I'm going to see The Pixies and The Stones Roses in the Summer so I'll go with them.

Name one track or band that you're loving right now.
Paul: I've actually only discovered Eagulls now and I'm in love with their music. Powerful, straight down the middle brilliance. Love 'Tough luck' from them.
Aaron: Been listening to a lot of Parquet Courts and Autolux recently. Two new albums from both those bands this year so I've gone on a bit of a binge.

Name one track or band that you think we should be listening out for in the future.
Paul: We share a room with our friends' band Fonda and they have some beautiful tunes they will be releasing soon.

What are you up to now?
Paul: We just did our first couple of head line shows finishing in London. Really, really great time and nice meeting new people and them digging our music. Planning to get back into the studio ASAP to start work on some new music.

What can we expect from you next?
Aaron: Time to hunker down and write some new material and get back into the studio. Although I'm sure we can be convinced to come out of our cave for a couple of shows.