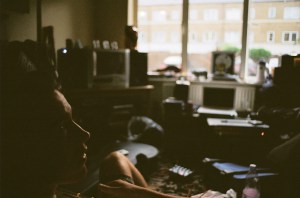 Tamu Massif's front man, Dave Dixon was answering our questions and from the outset he stayed true to his Bristol roots. The Birdcage plays host to "yesterday's clothing, today's coffee and tomorrow's music". In fact you can catch Tamu Massif (now just known as Tamu) playing there 10.01.15, and the lovely Lily & Madeleine 14.02.15. As far as music shopping goes, Rise-Music came out on top; they're proudly independent, offer staff picks, recommend records of the week and put on some pretty amazing in-stores - the next one being the awesome BC Camplight (22.01.15).

Dixon also wanted us all to know about Cascine, an independent record label based in London and New York. They champion alternative pop acts from all over the world. To give you an idea of what the truly alternative edge of 'alternative pop' might entail, listen to Stockholm's Korallreven's cover version of 'November Rain' by Guns n Roses.

The Bristol-based label Howling Owl is guided by the endearingly committed Joe and Adrian. Starting as a tape and zine release in summer 2011, the label quickly outgrew the pair's bedrooms and they now spend their time screen printing, drawing, photographing, painting, and nurturing every release. Releases like the swirling hazes of Oliver Wilde, and the apocalyptic originality of The Naturals.

As we delve into the realms of Past, Present and Future, Dixon isn't the first to name check this particular band; their influence is renowned far and wide. In the case of Tamu Massif, I would say it's how the Mac combine pop melodies with emotional sensitivity that brings these two acts together.

The track that Dixon was loving at the very moment we were picking his brains was Sylvan Esso's 'Coffee'. This American electro-pop duo released their self-titled debut record in May of this year and it became the soundtrack to thousands of Springs the world over. They have the enviable skill of making simple music with a hidden depth, and the album is beautiful.

Dixon's future recommendation was another minimal pop gem, Yumi Zouma. Their self-titled EP is awash with delicate lyrics lying on beds of synthesizers. Their vintage, luscious vibes got them supporting Lorde on tour earlier this year, but they've now returned to their native New Zealand.

And what of Tamu Massif themselves? Now renamed simply Tamu, the trio have had to downsize to a solo project from Dixon due to living in different cities. Watch the music video for their earlier song 'Azora' below, look forward to an EP some time around Spring 2015, and other than the afore mentioned gig at Bristol's Birdcage Tamu will also be playing the Old Queen's Head in London, 26.01.15.