I wouldn't call these gritty, stomping Cardiff rockers 'indie', but damn have they got catchy melodies. 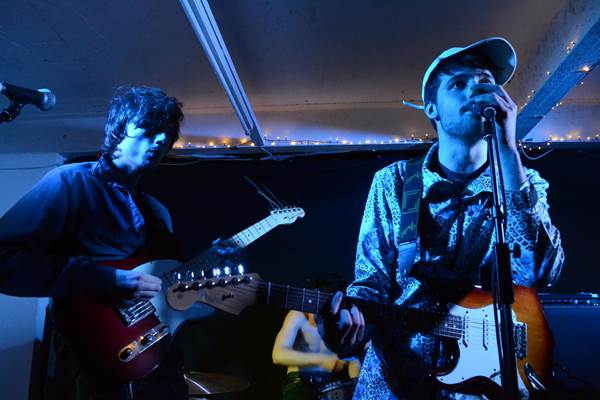 I wouldn't call these gritty, stomping Cardiff rockers 'indie', but damn have they got catchy melodies.

Our friends at Alcopop! recently released Tibet's double EP Above The Moon on limited edition vinyl, as well as it being released through the band’s own label, Rat Trap Recordings. It's bold, beefy and exemplifies the band's straightforward attitude. For example, Rat Trap Recordings itself started life as a club night and exhibition that pulled music and artistic talent from Cardiff together within unexpected venues. The double EP is really more of a mini album, and is worth listening to for the bass lines alone.

Jack at Alcopop! said, “We’re really pleased to be working with Tibet, who are one of the freshest-sounding bands around at the moment, and we’re delighted to be bringing them on board at Alcopop! It’s rare you’re so immediately blown away by an EP as we were with their debut, so it feels right we’re coming together now. Also - the Dalai Lama seems like a great guy, and I think he'd approve of a band with this name, so we're happy about that.”

RAW MEAT: Tell us about your local music scene; what’s your favourite local venue, are there any record labels or stores that we should look up, what’s the scene like where you're from?
Tibet: Cardiff is positively brimming with lively musical insects at the moment, it’s a mystery to us why pest control haven’t turned up to control the creative outbreak. Bands like Estrons, Rainbow Maniac and We’re No Heroes are crushing it right now.
Our favourite venue, although it’s not really a venue, is this little antiques shop called Jacob’s Market just a small stone's throw away from the station. Ourselves and a group of artists all put on a club night and art exhibition there called Rat Trap; it was dope, mega dope, the dopest of the dope.
Cardiff is home to the oldest record store in the world, Spillers Records. It’s only a small place, but it carries so much culture and history that it’s, by far, one of the best record stores we’ve ever been to. We played a little in-store show there for Record Store Day and got free t-shirts, so we love Spillers, hard.

Name one track or band that you love from the past.
I think it’s safe to say we all the love the Beatles. Very, very, hard.

Name one track or band that you're loving right now.
We’re all into Beck pretty hard right now, and his new track 'Wow' is a banger. We’re pushing into the realms of hip hop a little bit more now too - we dig Kendrick Lamar a lot.

Name one track or band that you think we should be listening out for in the future.
We played a show in Nottingham a few weeks back with The Magic Gang and they are hands down the best up and coming band we’ve seen in a while. They write some big tunes, and they’ve only had one EP out, so there’s much more to come.

What are you up to now?
At the moment we’re prepping for festival season, we’ve got a number of great festivals lined up including Reading & Leeds, Latitude, and Isle of Wight.

What can we expect from you next?
We’re in the process of recording our next single at the moment at home, getting some really DIY vibes going. The great thing about recording at home is that you can take your time a little bit, and make sure everything is perfect. We’re looking to release it early Summer time - keep the juices flowing.

You can see Tibet live at the below dates: