London’s Venice Trip will release ‘Reign Dance’ and B-side ‘Strangers In The Rough’ on 06.11.14, but until they do, the only place you can hear both tracks is right here on Raw Meat. 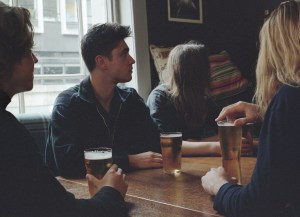 London’s Venice Trip will release ‘Reign Dance’ and B-side ‘Strangers In The Rough’ on 06.11.14, but until they do, the only place you can hear both tracks is right here on Raw Meat.

Venice Trip's psychedelic sound takes chunks of influence from The Doors and combines them with modern rolling grooves, adding bluesy undertones. The single launch party for ‘Reign Dance’ / ‘Strangers In The Rough’ is Thursday, 06.11.14 at Camden Town's The Monarch. Prior to unleashing their kaleidoscopic sounds on the city of London, they've given them to us, and taken the time to answer a few questions...

Raw Meat: Tell us about your local music scene; what’s your favourite local venue, are there any record labels or stores that we should look up, what’s the scene like where you're from?
Venice Trip: We're all from little shit towns- where I'm from the best you'll get is a Madness cover band. Except for Andres who's from Mallorca... bastard. We're all based in Harrow now - Trinity's the best place for seeing bands around here and we always get a good crowd when we play it. Central [London] has a much more vivid scene though, and we've been lucky enough to gig there with a number of great bands.

Name one track or band that you're loving right now.
We're all hooked on The Mystery Jet's Radlands right now.

Name one track or band that you think we should be listening out for in the future.
We played with a band called Isak's Island a while back. Kind of like King Crimson meets Temples. Listen to 'Leave It All To Space' for an idea of their sound.

What are you up to now?
Right now - having a few pints in Trinity.
We're preparing for our single launch on November 6th at The Monarch in Camden which should be good craic. There'll be a free copy of the single for everyone there.

What can we expect from you next?
We're in the studio at the moment with Michael Smith, who has worked with Mel Gaynor of Simple Minds and, more recently, Wolf Alice. We've really started to refine our sound. We're also working on a video and you can expect a long list of shows in the new year.