To celebrate the launch of their second compilation cassette, Roadkill Records are throwing an all-singing, all-dancing, all-day extravaganza. 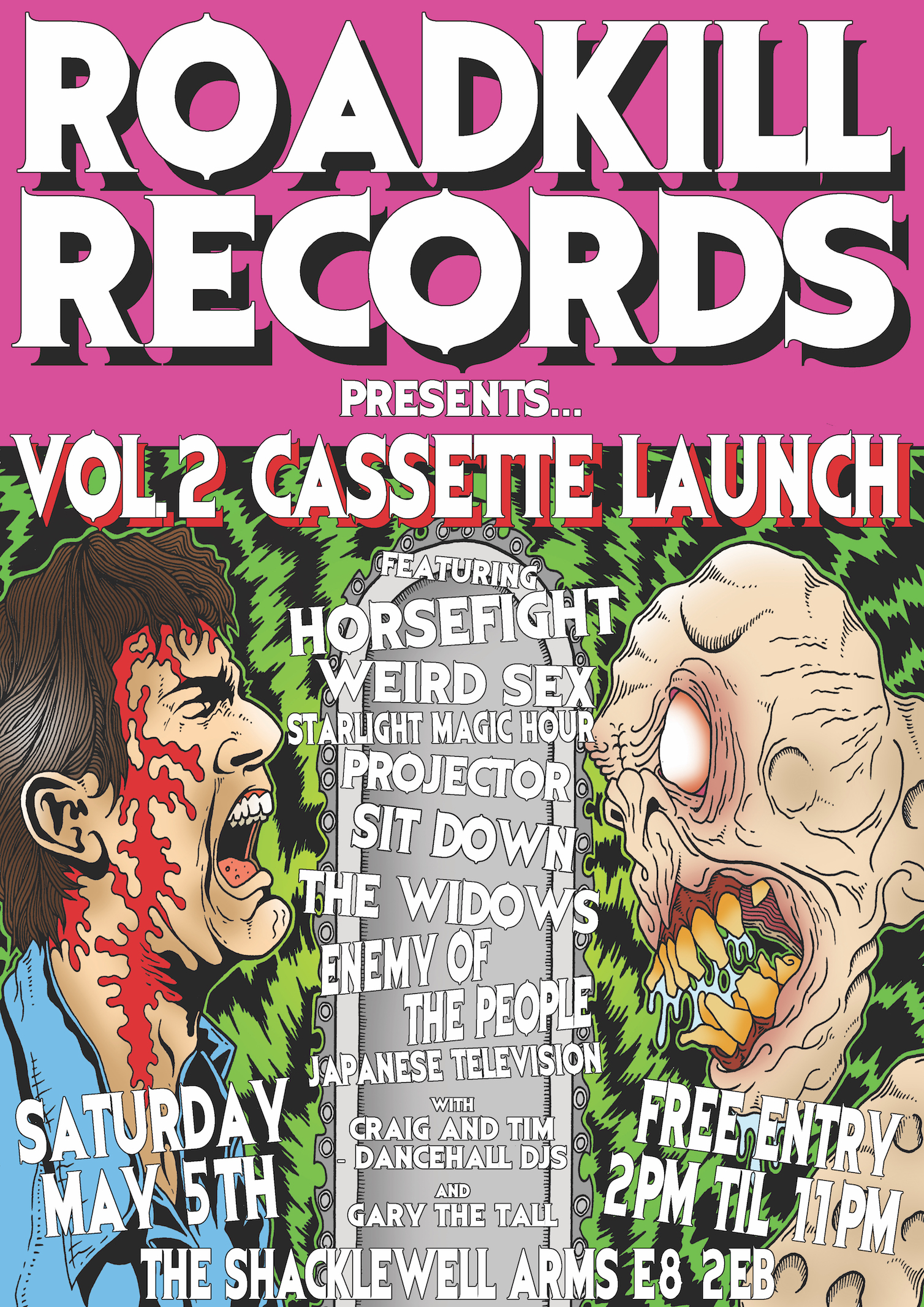 To celebrate the launch of their second compilation cassette, Roadkill Records are throwing an all-singing, all-dancing, all-day extravaganza.

Whether or not you've ever been to one of Roadkill Records' events, if you've spent any time with your nose buried within the pages of Raw Meat, you'll have at the very least heard of them. And although we've said it before and are sure to again, the team behind Roadkill Records are without a doubt, The Good Guys.

Starting out as a monthly music night that grew into guaranteed packed, beer-soaked dance floors and eventually lead to their first compilation; Roadkill are now a burgeoning DIY label. Releasing music mostly of a garage and psych persuasion on cassette and vinyl, they are a testament to the lucky successes that result from sweat, tears and not being arseholes.

Roadkill Records Vol 2 is a snapshot of where the label is right now, as the previous '1' was before. Out on 04/05/18 it features more than a few names that you might recognise, including Weirds, Madonnatron, Horsefight, Projector, Melt Dunes, Table Scraps, Dolls and Frauds.

As it isn't quite as much fun dancing on your own while throwing beer around your bedroom, let's take another look at that (free entry!) all-day launch party...

Kicking off at 3pm the day will begin with a relatively new addition to the world, Japanese Television, an instrumental outfit with air-tight in-band telepathy and rolling riffs reminiscent of Television. The basslines climb, interwoven with piano-wire synths and a shattering guitar-drums combo. Get stoned, close your eyes, start your night right.

If you're a regular Raw Meat reader then you'll have recently hear how we feel about Enemy Of The People, if you haven't I can tell you it's pretty passionate stuff. Their latest track 'Outer Space' is addictively catchy and more than a little nostalgic. A non-stop tirade of riffs, unsurprising where current and past members of HotGothic, Terminal Gods, Broken Soundtracks, Dysteria and Who Cares? are involved. They're a shot of heart-on-your-sleeve energy.

Next to take to the stage will be The Widows. Shimmering in post-punk bravado with some of the most magnetic vocals you'll hear this side of midnight, The Widows sear through rockabilly and garage, exploding out somewhere in the region of cowboy-noir.

After returning from blinking into the sunlight, gig-goers will be treated to the spacious sludge and harrowing doom of Sit Down. Their latest release Cheap Luxe was put out just last month and is absolutely dripping in snaking vocals, burrowing basslines and stadium-worthy drums. Skipping between Black Sabbath at half speed and that time Iggy Pop and Peaches collaborated, Sit Down are fast becoming one of our new favourites. Already over-excited, I'm not sure how we'll last the day.

Latest signing to Roadkill Records label, PROJECTOR will be the first to extend post-punk-pre-grunge arm of the day, outstretched and sweating. I've not seen them play live before and purely based on the merits of 'Break Your Own Heart' I couldn't be more excited. Repetitive phrases swarm around punch-drunk basslines, strutting beats and dynamic riffs; the vocals tonally alone would draw you in, but the combination of all three is lethal stuff.

Next up, The Starlight Magic Hour will turn the line-up thus far on it's head for the, "Oh my god how is it still light outside oh wait it is only half seven," portion of the day. Space synths, Cohen-meets-Cave vocals and funky as hell riffs make up the dance jams and shanty-esque creep pop peddled by this motley crowd.

Next up are longterm Roadkill alumni, Weird Sex. Including members of Sly Persuaders, Suicide Party and Six Inch Killaz, Weird Sex create absolutely fantastic slacker garage, reminiscent of a surrealist early Buzzcocks, if they had been sedated. They're a bunch of live show athletes, and take the performance responsibility of causing mischief and antics very seriously.

Finally, loudly, triumphantly, Horsefight. With provoking vocals (provokals?), tangled beats and riffs tripping over each other, Horsefight put on an excitable and riot-inciting show. Kicking the energy in the room's teeth in, Horsefight are an absolutely incredible live band.

Along with everyone's favourite attention-deficient Dancehall DJing and the ever obscurer Gary The Tall, the entire day is a testament to what Roadkill have built, and how they continue to hunt, find and nurture original and genuinely incredible bands, incessantly.